I am in the middle of working on a tool chest which I will post later based on some Paul Sellers plans.  Making the drawers required a groove for some 1/4″ plywood.  Of course most of us know 1/4″ plywood is not 1/4″ plywood, its actually thinner. So my plan was to file down a iron for the Record 44 to match up to the plywood.  Didn’t seem right to do that with an original set so I ordered up a new set from Ebay in the UK.  Yep, the UK and they arrived in 7 days!  Pricing was still better than buying them from Veritas (could use in the record 43). 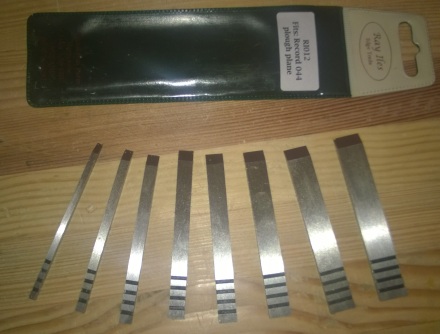 Turns out I didn’t need to grind one down, I got away with the 3/16 and a little planing of the panel on the edges.  A very nice set of irons for the Record 44 and they fit great!  So now my plow planes are all set.

Well I had a Record 43 plow plane I picked up from Jim Bode Tools for 75 bucks with shipping included.  What is a plow plane you ask?  It is a plane that cuts a groove in wood, like a dado blade on a table saw or  a straight bit on a router.  The blog Hand Made in Wood had a nice post on the Record 43.  Then as I am watching Paul Sellers Woodworking Masters Class (15 bucks a month, an absolute steal!!!!) on building a tool chest I see I need a 3/8″ plow plane.  Well crap, my Record 43 only goes to 5/16!  I read I could fit a 3/8 iron in my Record 43 but I could not find any on ebay.  I think I could have stuffed a chisel in there as well but what fun is that.

So the search began for a Record 44 when I found one on Ebay in England for 30 pounds.  No one bid on it, apparently Records are all over England and the locals must have thought it was over priced.  Well it was right priced for me.  Shipping was 20 pounds.  So a grand total of 87 dollars.  2 1/2 weeks later Fed Ex delivers it to my door 🙂 from across the ocean.

I didn’t realize it came in the original box, the top was not attached to the box as the tape had worn out but otherwise it was a barely touched plane with all the cutters. 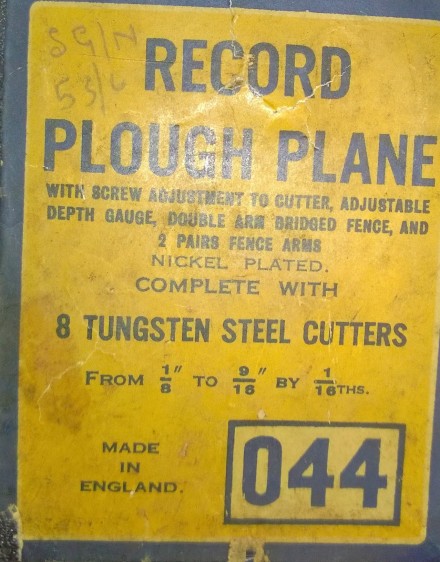 The cutting irons all the way from 1/8″ to 9/16″  and I am told you can go bigger but who needs more than that.  I can also use these in the 43.  The grooves provide for depth of cut adjustment on the Record 45, very cool.  The irons are not razor sharp so I have some honing to do.

The plane in parts.  It came with both short and long guide bars for the fence.  That pesky lever cap that holds down the irons needs to be tied to the handle, they have a habit of jumping ship.  So much so you can find the plans to make a replacement here http://www.oocities.org/plybench/levercap.pdf. The site also has some Record history here http://www.oocities.org/plybench/record.html.

Here it is with the short guide bars installed.

And another shot of the box. 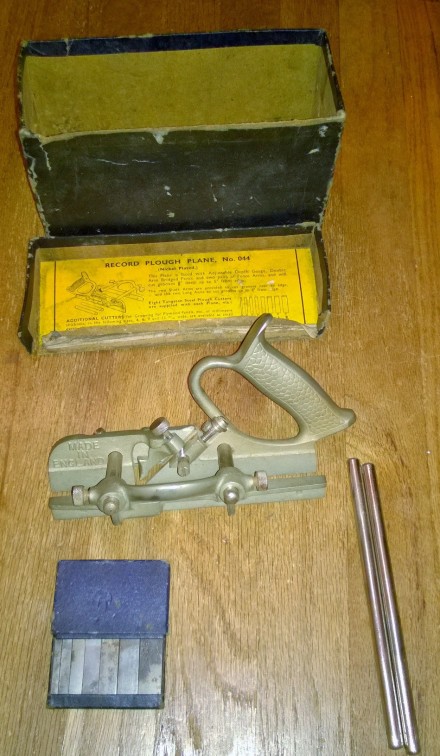 This is going to be a user.  For 162 bucks I got 2 plow planes and complete sets of irons.  They can cut grooves for panels, moldings, etc.  Its quicker and easier to set up than my router.  Alas I could have bought the Lee Valley, its pretty but its new and 275 dollars plus shipping and only adds 3 wider widths (advantage, they make left handed versions).  Can’t wait to start on Paul’s tool chest.